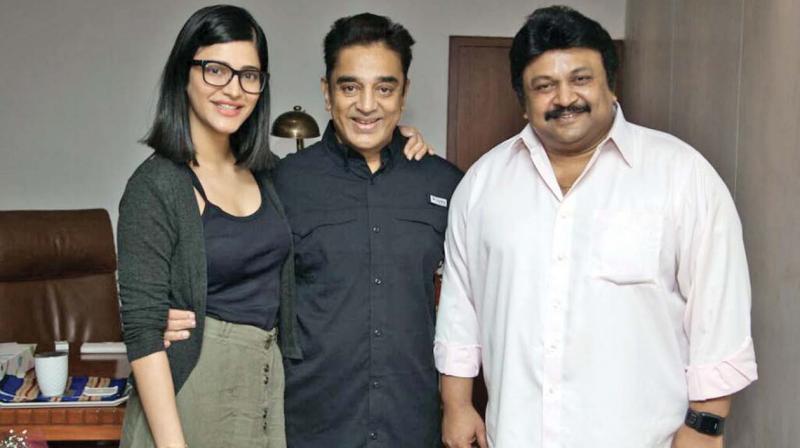 After winning the coveted Chevalier award, Kamal Haasan has taken social media by storm. Congratulatory messages have been pouring from all quarters and celebrities including Suriya, Karthi, Sivakumar, Prabhu, Ramkumar, and the Nadigar Sangam office bearers have been thronging his house to meet the actor, who is back up on his feet.

Talking to DC, Prabhu said, “As a fellow actor, I am extremely happy to hear that Kamal Haasan was bestowed with this award. Considering him my annan, I am overjoyed. My father, Sivaji Ganesan would beamingly say that Kamal Haasan is the ‘Thirai Ulaga Varisu.’ So, when it comes to the Chevalier award, I cannot think of anyone as deserving as Kamal Haasan. I pray that he shouldn’t retire anytime soon, and should continue acting for eternity. I met him yesterday after a long time. He has lost a considerable amount of weight. He is up on his feet, looking as handsome as ever. I just wish him happiness all his life.”

Rajinikanth, who is usually less active on Twitter, heaped praises on his peer Kamal Haasan when the French Government announced the prestigious award on Sunday evening. He wrote, “Congratulations to my dear friend Chevalier Kamal Haasan, who is the Nadigar Thilagam (the pride of actors) of our generation. (sic)”

Shruti who is presently working alongside her father in Sabaash Naidu  wrote, “My daddy is the strongest!!! Standing walking beating the obstacles and doing it in style. (sic)”

Veteran actor Sivakumar, who met Kamal  with his sons Suriya and Karthi, remarked as follows — “Not only Chevalier, Kamal, the living legend is the only actor who merits the world’s all best awards given to any artiste.”